Saturday 1 June felt wonderfully warm, as the Tenant Fees Act finally came into effect. If you’re looking for a new home now or in the future, and any agent attempts to charge you fees illegally, you should report it at once to the trading standards team of the local council.  If you can’t face doing that by yourself, please tell Renters’ Rights London . We can kick-start the process for you.

All the homeowners combined own only 5% of this land, Guy Shrobsole reveals. But to us renters, the most relevant and frustrating facts he presents are around the sale of public land. Across the past 40 years, half of all public land—around 2 million hectares or 10% of the overall land area of Britain—has been sold. Most of those 2 million hectares are now owned by private companies.

Public bodies no longer have the land to meet certain of our needs, then.  Private-sector bodies are driven by the profit motive and so lack any incentive to provide the same. As democratic control of land is lost, slowly but surely, free public parks; state-school playing fields; free long-term residential healthcare; allotments; entry‑level farm tenancies and, of course, genuinely affordable housing, are all disappearing.     Who Owns England? by Guy Shrubsole

There was a rats nest under the garden shed; there was rising damp on one wall of the sitting room; the back door was hanging off its hinges so could not be locked. Conditions in the house that Aleks and Tanya rented had become intolerable. The property owner completely ignored to their requests for repairs. Eventually, the couple moved their family out, three months before the end of a twelve month tenancy.

Now, the landlord is pursuing them through the courts for three months rent. In 2016, research from the National Landlords Association found that 33% of landlords in London had experienced ‘abandonment’. That percentage is quite similar to the proportion of homes in the private rented sector which were said to be ‘non-decent’ the same year. This might be mere coincidence.

We have every sympathy with renters who cannot face returning home to a really horrible house or flat, but the law does not. The property owner is entitled to pursue the renter who has left before the end of a fixed term for the sum of the rent due until the end of the tenancy or until the property is re-let; whichever happens first. Obviously, the landlord can deduct the total of the deposit from the claim and keep the deposit.

Now that the Homes (Fitness for Human Habitation) Act has come into effect, it would be against the law for a landlord to rent out a place in such poor condition. Each rental property must be safe, healthy and free from things that could cause serious harm at the start of the tenancy and maintained to that standard throughout the tenancy. That means without rising damp, with no infestations of vermin and with external doors providing proper security. But the Act only applies to tenancies created on or after 20 March 2019. The law will not apply to any tenancy signed before that date until March 2020.

Even now, if you find that you have rented a place where conditions could cause you harm, you should not withhold rent. This fact often shocks people who have previously rented in other countries.

If you find yourself living in poor conditions and the landlord or agent is unresponsive to your written requests for repair, we strongly recommend that you contact the environmental health team at your local council. They have significant powers to enforce standards in the private rented sector.

If you would rather move out, you should ask the property owner, in writing, to agree to terminate the contract and end the tenancy early. They are under no obligation to do so but if you explain that you will otherwise contact the council environmental health department, they are more likely to see it your way.

Now, when it’s warm enough to turn off the heating, might seem an unlikely time to talk about energy bills. But earlier this week, Ollie at EnergySeek asked us to tell you about their  2019 cheap energy deals guide. And Ollie’s email included this

As we explained last October, some landlords and letting agents have arrangements with a preferred energy provider. If so, the company is likely to be named in your tenancy agreement as the default supplier. But if it’s your name on the bill, you are still entitled to switch. You should be prepared to switch supply back to the default company at the end of your tenancy, though. Even if your landlord pays the bill then passes the cost on to you, it’s worth checking, to see if there’s a cheaper deal available and then, discussing the options with your landlord.

The votes of housing association tenants and staff reveal these very worthy winners in 2019. 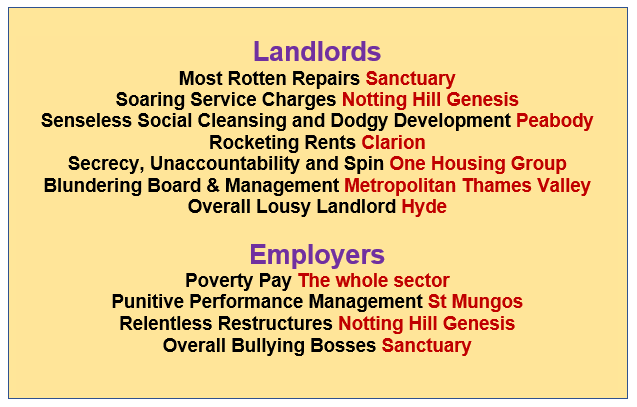 Find out about renting in your borough and what your politicians are doing about it:

Do you run a local community group or association somewhere in London? Do some of your members rent their homes from a private landlord? If you'd like us to give a 10 minute talk on how to be a more savvy renter, do please get in touch via email; or call 020 3826 4783